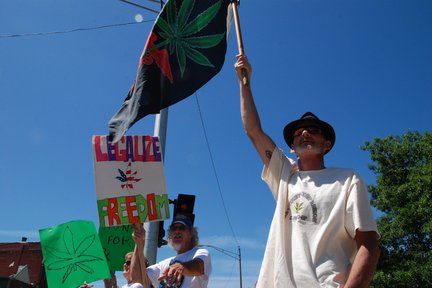 Jay L. French, 45, of Bay City waves a flag during the July 1 protest outside of the Saginaw County Governmental Center. Medical marijuana backers in the protest at Court and South Michigan took aim at drug enforcement seizures by the Saginaw County Sheriff’s Department.

SAGINAW — Medical marijuana advocates at the intersection of Michigan and Court in Saginaw pumped signs into the air, wagged flags depicting pot leaves and cheered in the direction of passing vehicles, prompting supportive honks and waves from some motorists about noon today. “Arrest my suffering, not me” and “Haven’t you always wondered why marijuana is illegal,” it said on two signs, one neon pink, and another read: “Change this law, Mr. Obama, The Constitution demands it.”

Joe Cain, a U.S. Marine Corps veteran and the chief executive officer of the Michigan Medical Marijuana Association who organized the rally, with long gray hair and a mustache, said he’s happy with the turnout so far.

About 11 a.m., five protesters stood on the street corners with signs, while about 30 others rustled about in Borchard Park, where a table held informational documents and a videocassette movie labeled “Hemp for Victory.” They prepared signs and conversed. Onlookers clapped for several speakers who gave speeches from the park’s gazebo.

By noon, the number of protesters swelled to nearly 100, many who traveled to Saginaw from outside the county, and dozens stood on the corner holding signs.

“It’s growing,” said John Roberts, 49, of Thomas Township. The protest is scheduled to continue until 3 p.m.

The home he lives at with his fiancee, Stephanie Whisman, 38, was raided by the Saginaw County Sheriff’s Department — with support from the federal Drug Enforcement Agency — on April 15 and again by DEA agents on July 6, less than a week after a protest Roberts staged outside the Saginaw County Governmental Center, 111 S. Michigan.

During that protest, state police arrested his fiancee on a warrant that was issued because of a $23 outstanding city tax bill.

Today’s protest was a response to the latest DEA raid.

Robert Redden, 59, said he drove two hours from Madison Heights to participate in the rally.

He showed off his medical marijuana card with a sticker that said “defendant’s exhibit C.”

Redden, who suffers from a bone disease, said he was arrested for growing medical marijuana and charged with illegally manufacturing it in Madison Heights 18 months ago. His case will likely be heard by the state Supreme Court, he said.

He wore a paper grocery bag over his head that said “Marijuana patient,” with two eye-slits to see through.