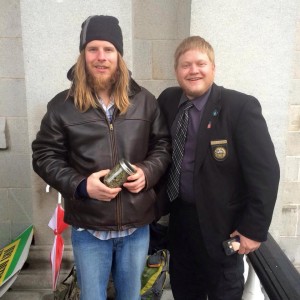 Dylan Gingues and NH state rep Kyle Tasker with a big jar of primo cannabis outside the State House.

For the sixth consecutive year, activists smoked cannabis out in front of the New Hampshire state house on April 20th at 4:20pm, in heroic defiance of the state’s draconian drug laws that consider cannabis possession to be a misdemeanor, punishable by up to a year in jail and up to a $2,000 fine.

Dozens of New Hampshire’s inhabitants braved constant rain and cold to come out for the epic event, which also featured state representative Kyle Tasker toking up.  Tasker later said in an interview exclusive to Free Keene, “The message sent by law enforcement and heard loud and clear by protesters was police have more important things to do than harass otherwise law abiding citizens over marijuana possession and public use even when it was clear there were amounts present at the protest that could be charged as a felony. The New Hampshire senate needs to consider how productive it is to keep an unenforced, indeed nearly unenforceable law on the books with which the public disagrees.”

No one has ever been arrested at these events despite mass civil disobedience of the cannabis possession laws taking place right outside the state house’s front doors. In fact, obvious police presence was near-zero this year, with a lone state trooper sitting across the street idling in his cruiser for a short time. In previous years, troopers have stood inside the state house windows, watching with crossed arms. This year, nothing!