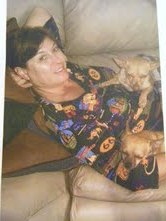 Racheal Tamagni at home with her dogs before the raid

Medical marijuana advocates plan to protest against what they claim were aggressive and uncalled for raids on local cannabis delivery services at a rally planned for Tuesday, Jan. 11 at 7:30 a.m., in front of the San Luis Obispo County Courthouse.

During the December 27 arrests, one man suffered a heart attack, guns were held to the heads of children as they were drug from their beds, family pets were kicked, grandparents were handcuffed and forced to lie on the floor and children were removed from their parents’ custody, multiple sources said.