Alabama Patient Facing 10 Years for a Gram of Medical Marijuana 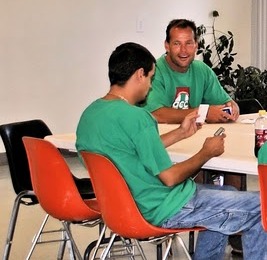 Activists in Alabama have been trying for years to get a medical marijuana bill passed there. Last year, for the first time, a bill made it out of committee. Next year, they will try again, but even if they succeed, it will be too late for Michael Lapihuska.

Lapihuska, cursed with depression and Post-Traumatic Stress Disorder (PTSD), grew up in Alabama, but left the state after serving 13 months for possessing five grams of marijuana in 2003. The now card-carrying medical marijuana patient from California was arrested on marijuana possession charges again on December 15 in Anniston, Alabama, as he visited his family for the holidays.

Lapihuska was stopped by a police officer and accused of hitch hiking as he walked down a road. The officer demanded he be allowed to search Lapihuska, and he complied. The search came up with a prescription bottle containing one gram of marijuana. Lapihuska explained that he was a registered California medical marijuana patient and produced a patient ID card.

“Alabama is a terrible, terrible place when it comes to drug laws,” noted Loretta Nall, a long-time Alabama drug reform activist and leader of Alabamians for Compassionate Care, a medical marijuana activist group that has taken up Lapihuska’s cause.

Lapihuska’s public defender is urging him to cop a plea in which he would be sentenced to one year, with the sentence suspended and two years probation. But that deal also includes drug testing, and that’s a deal-breaker for him. “Everyone says just take the probation, but if I did that, I’d end up in prison anyway for failing the drug test,” he said.

“This is Anniston, Alabama,” said Laiphuska. “There is no way I’m going to win this case. But my doctor told me this was my recommended medicine. If I was prescribed Oxycontin, or morphine, or Xanax and was walking down the road, they would have had to give my medicine back. I broke the law, but I think the law is wrong. I’m looking at two to 10 years for a gram of marijuana prescribed by my doctor?”

Lapihuska has been stuck in Alabama since December while awaiting trial. It hasn’t exactly been fun, he said. “I’ve been miserable and anxious. I just want to go someplace where my medicine is safe and legal and I’m not at risk for using the medicine that works best for me.”

In addition to repeated stints behind bars for using marijuana, Lapihuska has been hospitalized for mental health reasons 20 to 30 times, he said. “I’ve been on all sorts of medication. Most of my life has been eaten up with anxiety. They’ve tried Xanax, Thorazine, all kinds of things. They even gave me an anti-Parkinson’s disease medicine and told me I would have to take it the rest of my life. I would sleep 16 hours a day on those meds, I’d be shaking,” he recalled.

Unless he or state prosecutors relent, Lapihuska goes to trial October 28. If it comes to that, the Alabama medical marijuana community will do what it can, just as it has been beating the bushes to publicize the case already.

“Here in Alabama, our only hope of helping Michael out if this goes to trial is to do some jury nullification work,” said Nall. “When he goes to trial, myself and other members of ACC will do some handouts at the courthouse to inform people about the true nature of the situation, that he was not just some guy smoking weed. We hope to find one person on the jury to vote to nullify.”

Nall and ACC, for whom Lapihuska has been volunteering while he awaits trial, have been laying the groundwork for that by getting the story out. “We got a great article in the Anniston Star,” she said. “That generated nothing but wonderful comments on the web site and three letters to the editor, all positive. We’ve been getting a lot of positive feedback on Facebook, too.”

Lapihuska’s plight may help the cause of advancing medical marijuana at the statehouse. Rep. Patricia Todd, sponsor of last year’s medical marijuana bill, said she would reintroduce it for the session that begins in March. She would try to make it more palatable to law enforcement, she said.

“I’ll pre-file the bill after the first of the year,” Todd said. “We plan to sit down with law enforcement and health people, and may make some changes to appease law enforcement. I think the bill will start out with three dispensaries around the state, to be regulated by the health department. I think patients being able to grow will be part of it. The main heartburn the health department has is how to regulate it, how to know who’s growing what.”

While movement on medical marijuana in the legislature has been painfully slow, Todd expressed guarded optimism that her bill would move next year. Last year, for the first time, it got out of a House committee. But much depends on the outcome of the November elections.

“If the Republicans take over the legislature, the bill is going nowhere,” she said. “If the Democrats keep control, it’ll still be an uphill battle. We got it out of committee last year; this year, I hope we can get it to a floor vote.”

“It should be coming up very early in the session,” Todd said. “Attitudes are changing. Legislators watch the news, and we have a pretty good grassroots effort going. The main fear last year was that we don’t want to be like California, with a dispensary on every corner, and I think we will have addressed that.

Todd said that had her bill passed last year, Lapihuska wouldn’t be facing the problems he is. “Our bill has the reciprocity clause in, and that would protect Michael and people like him,” she said.

“It’s totally ridiculous,” said Todd. “He had a card that identified him as being able to use medical marijuana. I’m trying to change this, but this is the Deep South,” she sighed.

If Lapihuska is sent to prison, it will be a tight squeeze. Alabama’s prisons are at 180% of capacity, Todd noted.

“Our corrections commissioner makes the point to the legislature each year that he wishes we would quit passing laws to incarcerate more people,” she said. “But I’m the only one who ever votes against them. Most of our elected officials are afraid they will be perceived as soft on crime, but the war on drugs isn’t working, we have more people addicted than ever before. I think marijuana should be legal, and I’ll keep on fighting.”

So, it appears, will Michael Lapihuska — unless he can persuade prosecutors to offer a sweeter deal. “I would accept two years of unsupervised probation in California, but for me to have to stay here and do drug rehab for my doctor approved medication, that’s ridiculous. And with drug testing, if I use my medicine, I violate probation.”