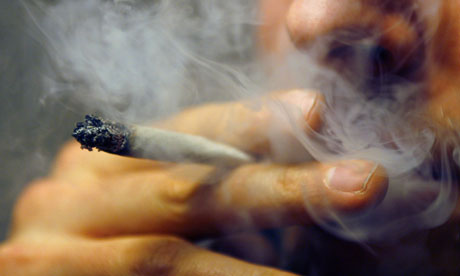 Tim Hollis, chairman of the Association of Chief Police Officers’ drugs committees, does not want to criminalise people caught with minor amounts of substances such as cannabis. Photograph: Daniel Karmann/CorbisOne of Britain’s most senior police officers has said youngsters caught carrying personal amounts of drugs such as cannabis should “not be criminalised”, in order to allow more resources to be dedicated to tackling high-level dealers [see footnote].

Tim Hollis, chief constable of Humberside police, said the criminal justice system could offer only a “limited” solution to the UK’s drug problem, a tacit admission that prohibition has failed.

Hollis’s dramatic intervention comes as the government is reviewing its 10-year drug strategy amid growing warnings from experts that prohibition does not deter drug use and that decriminalisation would liberate precious police resources and cut crime.

Hollis, chairman of the Association of Chief Police Officers’ drugs committee, said he did not want to criminalise young people caught with minor amounts of substances such as cannabis. A criminal record that could ruin their career before it began was disproportionate, he said.

Hollis said budget cuts had forced police to “prioritise” resources towards tackling organised criminal networks rather than individuals carrying drugs for personal use. He also backed calls for the current drug classification system into class A, B and C to be re-examined following concerns that bracketing substances such as heroin and ecstasy in the same class is confusing.

“We would rather invest our time in getting high-level criminals before the courts, taking money off them and removing their illicit gains rather than targeting young people. We don’t want to criminalise young people because, put bluntly, if we arrest young kids for possession of cannabis and put them before the courts we know what the outcome’s going to be, so actually it’s perfectly reasonable to give them words of advice or take it off them.”

Hollis said financial constraints meant it was impractical to arrest everybody caught with new designer drugs available online and added that a debate was needed over whether alcohol and nicotine, which together kill more than 120,000 people a year, should be included in attempts to tackle illegal drugs.

“My personal belief in terms of sheer scale of harm is that one of the most dangerous drugs in this country is alcohol. Alcohol is a lawful drug. Likewise, nicotine is a lawful drug, but cigarettes can kill,” he said. “There is a wider debate on the impacts to our community about all aspects of drugs, of which illicit drugs are one modest part.”

The comments by Hollis come as a row continues between scientists and politicians over cannabis. One of Britain’s leading researchers into the drug, Professor Roger Pertwee, argued last week that policymakers should consider allowing the licensed sale of cannabis for recreational use, claiming the current policy of criminalising cannabis was ineffective.

Both David Cameron and Nick Clegg are on record as questioning the effectiveness of Britain’s drug laws.

Officially the Home Office insists decriminalisation is not the right approach and there is clear evidence cannabis can damage mental health. Insiders, however, have told the Observer that officials are looking at “non-prosecution” strategies. The government has recently studied Portugal’s approach in which the authorities have discreetly decriminalised the use and possession of substances including heroin.

• This footnote was added on 21 September 2010. The original headline read: Police chief issues call to decriminalise cannabis and redirect resources. This has been changed. The first paragraph originally read: One of Britain’s most senior police officers has proposed decriminalising the personal use of drugs such as cannabis to allow more resources to be dedicated to tackling high-level dealers. This has been amended to make clear that Chief Constable Tim Hollis has stated that neither he nor ACPO are calling for the legalisation of cannabis. Rather, he is seeking to open a mature debate around the harms caused by illicit drugs and the role of the police service regarding enforcement.