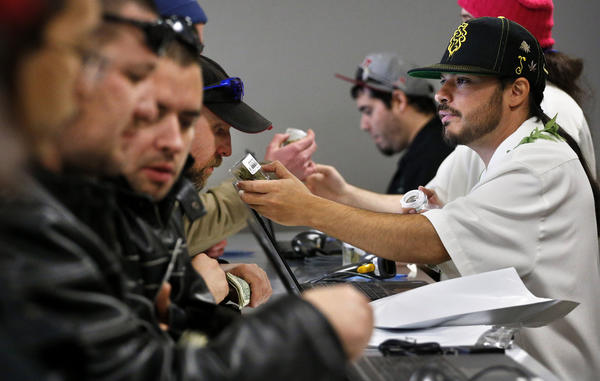 David Marlow, right, helps a customer, who smells a strain of marijuana before buying it, at the crowded sales counter inside a marijuana retail store in Denver on Jan. 1. (Brennan Linsley / Associated Press / January 1, 2014)

The United States is one of only 22 countries that doesn’t guarantee what’s called “retroactive ameliorative relief” in sentencing. Which means that when a law such as one legalizing marijuana is passed in America, those already convicted of marijuana crimes don’t automatically have their sentences relaxed. This puts us in the company of such bastions of social justice as Pakistan, Oman and South Sudan.

If Germany were to legalize marijuana, on the other hand, those convicted of weed crimes would see their sentences commuted, according to the USF report.