DVD Review: “Jack Herer is the Emperor of Hemp” 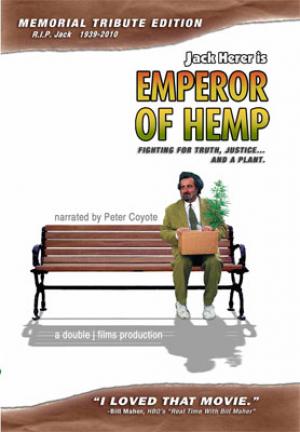 Jack Herer, author of “The Emperor Wears No Clothes,” and arguably “the greatest cannabis crusader of all time,” died in April after suffering a heart attack at the Portland Hempstalk Festival eight months earlier. The passing of the movement icon prompted the release of this memorial tribute edition of “Jack Herer is the Emperor of Hemp,” which updates the decade-old release with new interview footage with the prophet of hemp and includes the entire 1943 Department of Agriculture film “Hemp for Victory.”

But it’s not just the new, never before seen interview material that makes this DVD reissue worthwhile, because Jack Herer’s story is fascinating in itself and “Jack Herer” does an admirable job of explicating the man, his evolution, and his passions. (Not to mention you’ll get to see NORML founder Keith Stroup before his hair turned white!)

Herer’s story is a true American journey (and by the way, it’s pronounced HAIR-er, not Huh-RARE). Born in 1939, Herer entered the 1960s as a conservative — an Army veteran and Goldwater supporter, married and living in California’s Central Valley, who was offended by the upheavals of the time, disgusted by anti-war protestors, and blamed much of the upheaval on the demon weed. Who knew?

By the following decade, things had changed dramatically. Divorced, Herer’s new girlfriend persuaded him to try marijuana. Here, the DVD shows a dancing girl as Norman Greenbaum’s “Spirit in the Sky” booms out on the soundtrack, an apt evocation of Herer’s transformation from military policeman to hippie, from Goldwater Republican to radical.

With Emmy Award winner Peter Coyote narrating, and with archival footage and interviews from the likes of NORML’s Keith Stroup, historian Michael Aldrich, Kevin Zeese, and Dr. John Morgan, “Jack Herer” tracks Herer’s odyssey from author of a 1973 marijuana cartoon book to his subsequent experience as recipient of knowledge from innumerable people about not just pot, but hemp, and all its uses, his opening of the first hemp store on Venice Beach in 1979, and ultimately the publication of the book that made him famous and re-energized the marijuana legalization movement, “The Emperor Wears No Clothes.”

The DVD acknowledges the early conflicts between Herer and the drug reform movement, which at first considered him at best an over-enthusiastic partisan and at worst a crank. Herer thought hemp could be central to ending marijuana prohibition, not to mention that it could “save the world,” and the be-suited boys back East weren’t buying what that wild-eyed, tie-dyed, missionary Californian was selling.

A number of years later, the movement types were suitable contrite. “He overstated the case a bit,” said Stroup. “We were embarrassed; we thought it could undermine our credibility.”

Instead Herer almost singlehandedly revitalized the pot movement with the 1985 publication of “The Emperor Wears No Clothes,” the magnum opus of hemp, and an intoxicating combination of unknown history, polemics, and passion that turned a new generation on not just to hemp, but to pot, the history of its criminalization, and the need to undo prohibition.

“Jack Herer” describes the tenets of “The Emperor Wears No Clothes” fairly without wholeheartedly endorsing his theory of an evil troika of Harry Anslinger, the Dupont family, and Andrew Mellon conspiring to bring on prohibition. And I think that’s fair. Herer’s conspirators most certainly played a role in pot prohibition, but the anti-marijuana movement was alive and well in this country well before Anslinger and the others were active in the 1930s.

Maybe hemp won’t “save the world,” but there is no arguing that it is a tremendously valuable plant with a multitude of uses that can help improve the environment, create jobs, and provide us with everything from biodiesel to body panels to an ever-increasing variety of hemp-based foods.

And Herer’s perhaps overenthusiastic message was received enthusiastically by that new generation, especially when tied to his never-forgotten broader campaign to legalize marijuana, beginning with initiative campaigns back in the 1970s. Between bringing hemp to the forefront and energizing a movement suffering through the depths of the Reagan Era, Herer cemented his place in movement history.

But he didn’t stop there. In fact, he didn’t stop until he fell over unconscious at a movement event just after giving one last speech. Herer was a movement presence throughout the 1990s, and by then, had won the acceptance of the movement, which recognized the enormous contribution he had made. Despite a 2001 stroke that laid him low, he bounced back, still out proselytizing and organizing, even as he moved slowly and struggled to control his voice.

In California, at least, every marijuana movement figure of a certain age knew Jack Herer. Whether from his days as the hemp hawker of Venice Beach or the decades of activism that followed, Herer has made a lasting impact on California’s — and indeed, the country’s — marijuana legalization movement. “Jack Herer is the Emperor of Hemp” pays fond homage to a true movement hero. It is definitely worth checking out, especially as you ponder the man, his life’s work, and his impact on the marijuana reform movement.