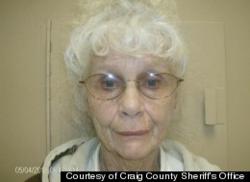 Darlene Mayes, a 74 year old grandmother in Oklahoma, was accused of being the ringleader of a multi-state drug operation. On Friday, at the request of her defense attorneys Josh Lee and Clint Ward, a judge dismissed the charges, according to court documents (case number CF-2012-69 in District Court of Craig County).

Last year, the arrest of Mrs. Mayes made television and print headlines around the world when, according to court documents, authorities accused her of possessing several pounds of marijuana and nearly $300,000 in cash. Attorney Josh Lee had maintained that Mrs. Mayes is innocent of the charges. Law enforcement officials, however, claimed that she was responsible for a large, multi-state drug operation that was possibly responsible for 40 percent of the marijuana trade in the Grand Lakes area.