New York City has earned itself the sobriquet of Marijuana Arrest Capital of the World, with tens of thousands of minor pot possession arrests every year — mostly of young men of color — generated in good part by the city’s equally infamous stop-and-frisk policing, again aimed primarily at the city’s young and non-white residents. There’s a man running an outsider campaign for the mayor’s office there this year who wants to end all that. 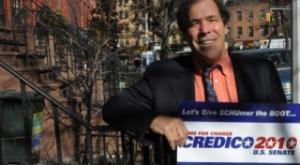 Veteran Big Apple civil rights, social justice, Occupy Wall Street (OWS), and drug reform activist Randy Credico, who also doubles as a professional comedian, is mounting an insurgent campaign for the Democratic Party mayoral nomination, and he wants to end the city’s drug war and a whole lot more, and he wants to do it now.

The inventively funny, yet deadly serious, agitprop artist has an ambitious 17-point program for his first day in office, with promises that range from going after “the biggest criminals in our city” — the Wall Street bankers — and reforming the city’s tax code to favor the poor to rolling back privatization of city schools and reforming various city agencies.

But just beneath banksters and taxes is a vow to begin reining in the NYPD by firing Police Commissioner Ray Kelly (to be replaced with Frank Serpico) and “abolishing the NYPD’s unconstitutional policies of racial profiling, stop and frisk, domestic spying, entrapment, and its infamous (albeit unadmitted) ‘quota system.'”

Central to that policing reform plank, Credico says, is reclassifying the smoking and carrying of marijuana as no longer an arrestable offense. He also vows to fire any officer who lies or perjures himself on the stand, and to bar the use of “no-knock” warrants and stun grenades “except in the case of legitimate terrorist attack.”

And he wants to replace the city’s Special Narcotics Office with a Harm Reduction Office, whose leadership he has offered to Drug Policy Alliance head Ethan Nadelmann. He also vows to shut down the Rikers Island prison and turn it into a treatment center and education facility with a state of the art library, and to nominate law professor Michelle Alexander, author of The New Jim Crow: Mass Incarceration in the Age of Color-blindness, to run it.

That’s quite a tall order for a first day in office, but Credico says he’s up for it.

“I plan to stay up for 24 hours and get all that stuff done,” he told the Chronicle.