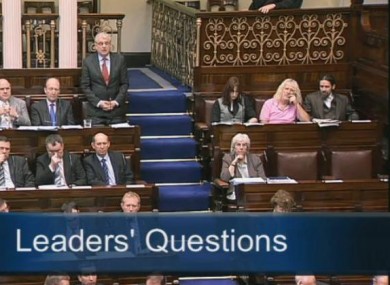 LUKE ‘MING’ FLANAGAN wore a Louis Copeland suit made out of hemp in the Dáil chamber this morning to highlight the 10 year anniversary of his campaign to have cannabis legalised.

A spokesperson for Louis Copeland confirmed that it was the first time the high-end tailor had created a suit made out of hemp.

Speaking to theJournal.ie, the TD for Roscommon-Leitrim South said that he had bought the material outside of Ireland but that the suit had been made in Dublin. “If I could have purchased it here, I would have,” he said.

The hemp suit is “very comfortable, excellent material, and it’ll be my attire for many an occasion from now on,” said the TD.

Flanagan said that it is ten years since he posted joints to journalists and members of the Oireachtas as part of a National Legalise Cannabis Day – but that little has changed.

“In the 10 years that have passed, it is estimated that €7.5 billion has ended up in the pockets of the kind of people who had Veronica Guerin killed. 60,000 people have ended up with a criminal record and for what? What was the goal?”

Flanagan emphasised the specific issue of cannabis being sold with adulterated substances which are seriously harmful to the health of the user,  noting that silicon, crushed up car tyres and “God knows what” is being added to cannabis. “Someone found dealing the substance with these adulterants in it should receive a stricter sentence”, he said.

Flanagan, who gave up smoking cannabis several years ago, said that the best way to guarantee that people know what kind of cannabis they have is to legalise it.