Roger Christie, founder of The Hawaii Cannabis Ministry (THC Ministry), has been ordered held without bail after being arrested along with 13 current or former employees and growers by the DEA on July 8. He and the others are charged with marijuana trafficking offenses related to their alleged distribution of marijuana as a sacrament at the ministry. 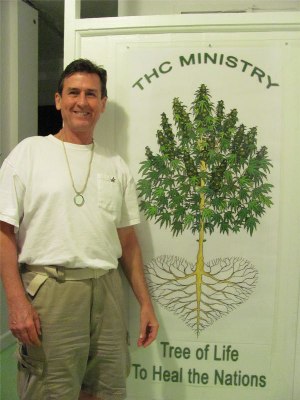 Christie had been raided by the DEA in March, with agents seizing cash and marijuana at that time, but not arresting him. Federal authorities allege that after that raid, Christie recommenced his marijuana distribution at the ministry. He and the others were secretly indicted last month.Federal Magistrate Judge Kevin Chang originally ordered Christie held without bail at federal prosecutors’ request. Christie and his public defender, Matthew Winter, last week filed a motion seeking his release, citing the nonviolent nature of the offenses, Christie’s longstanding ties to the community, his lack of a criminal record, and his willingness to abstain from marijuana use or distribution pending trial.

A federal pre-trial services report also recommended that Christie be freed on bail. But prosecutors fought back with a 46-page memorandum in opposition. Because Christie allegedly recommenced marijuana distribution after the March raids, that made him “a danger to the community and… no conditions/combination of conditions could assure the safety of the community,” they wrote.

On Friday, US District Court Judge Alan Kay agreed with prosecutors. Now, Christie will be held behind bars until trial because the pot-loving minister is “too dangerous” to be freed on bail.