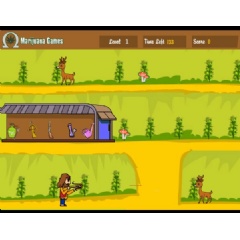 Defend marijuana crops in Crop Defender
MarijuanaGames.org announced the release of 2 new cannabis-themed video games this week, adding the titles Crop Defender and Too Stoned Russ to its stable of marijuana games.  Previous games produced by the US-based company were mostly parodies such as Stoned Mario and Stoned Pacman.  However, the 2 new games released by the company stray from this concept with more original storylines and game play.

Crop Defender is an 8 level full feature video game where players must defend their marijuana crops from a variety of threats including drought, fungus, insects, deer, thieves and police.

Too Stoned Russ is just 3 levels and pokes fun at the company’s founder, Russ Hudson.  In this game players are tasked with keeping “Russ” upright as he travels through a stoner’s world.  Hudson says this game was meant to let people know that although he takes his work in the cannabis industry serious,

“There is also a fun side to this industry that we must keep in perspective.  Yes, marijuana has significant medical applications, but it’s also a great way to have fun, socialize, relax and unwind.”  Hudson explained during a recent interview.