Irvin Rosenfeld is a hero to any sick person who has ever felt the positive, ultrahealing vibes marijuana has on the body. When he was 10 years old, Rosenfeld was diagnosed with a genetic disease that causes tumors to grow at the ends of the long bones in his body. That’s why doctors had him doped up all the time.

“I was taking all kinds of prescription narcotics as a kid,” the Virginia native recalls. “I had morphine and Azolam. You name it, I had it. But I was totally against illegal drugs. I used to speak to high school kids about the perils of doing illicit substances.” 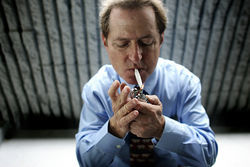 So what’s he up to now? It’s shortly before 11 a.m. on a muggy July day, and he’s sitting behind his desk at Fort Lauderdale’s New Bridge Securities, where he is senior vice president of the stock-trading firm. His boss is cool with him smoking the green. On the job! And he can’t be busted!

Rosenfeld says he came to the illuminating realization pot was good for him his senior year in high school. In 1971, his doctor told him warm weather would do him good, so the then-19-year-old cruised down to South Florida and rented a pad at Sunset Apartments on Galloway Road in South Miami. By then, the southern part of the Sunshine State was a freewheeling doper’s paradise. “Most of my neighbors were college students,” he says. “And many of them would be drinking alcohol and smoking pot.”

Naturally, Rosenfeld’s anti-illegal-drug stance made him a buzz-kill. He’d decline invites to smoke grass with neighbors. “After 30 days of saying no, I wasn’t making any friends,” he says. “So one day, I relented and gave it a try.”

Rosenfeld claims he didn’t get high, but something more remarkable took place, something similar to that scene in Stanley Kubrick’s 2001: A Space Odyssey when the apes wake up to the black monolith and just go bananas. Um, not exactly like that, but it was one of those epiphanic moments that make us humans realize we are very special beings who have the capacity to rationalize and conclude that, hey, smoking some reefer could, like, save our lives. Well, that’s what happened to Rosenfeld.

“I couldn’t sit in one place for more than ten minutes due to the pain caused by my disease,” he continues. “After I took my first hit, I played chess for close to 30 minutes. I didn’t feel any discomfort.”

Being a smart fellow, Rosenfeld studied the history of marijuana. He discovered the drug had been legal in the States from 1860 to 1937, primarily for the treatment of pain. “I began using marijuana off and on to test its effects,” he says. “I reduced my use of heavy narcotics as well.”

A year later, he dropped out of school and returned to Virginia, where he embarked on a mission: He would make the case before the federal government that he should be allowed to have his grass. So with the help of his primary physician, Rosenfeld argued before a panel of 20 doctors assigned by the Food and Drug Administration to hear cases from individuals seeking approval to use marijuana for medical purposes.

It worked. In 1982, Rosenfeld became one of two people in the entire country to get the federal government’s OK to use marijuana. The number grew to nearly 30 until George H. W. Bush’s administration shut down the medical marijuana program in the early ’90s.

Luckily, Rosenfeld and the original dozen patients were grandfathered in and still get their pot from a farm run by the feds at the University of Mississippi. Yeah, the feds grow grass. So every 25 days, he picks up his prescription of approximately 300 marijuana joints in a metal tin.

“I have not had morphine in 20 years,” he says triumphantly. “Smoking marijuana has kept my tumors from growing. I have not had a tumor grow in 30 years. I attribute it to cannabis.”

So now he’s on the pro-medical-marijuana speaking circuit. He recently traveled to Oregon, where he spoke on a panel that included Robert Platshorn, the man who served the longest prison stint in U.S. history (29 years) for marijuana trafficking. “Marijuana is a fantastic medicine,” Rosenfeld says. “Doctors should be allowed to prescribe it nationwide.”

Rosenfeld will toke up right in front of your face. In fact, he tokes every day at work in the parking lot. And his office is in the same building as the Drug Enforcement Administration. Not even the agents inside the complex can mess with him. Cuhrazy, brah!

At 11:15 a.m., he is on one of his four smoke breaks. He reaches into the right breast pocket of his blue short-sleeve dress shirt and pulls out a clear plastic bag containing several joints. He grabs one, places it on his lips, and ignites it. As he takes the first drag, a pungent odor confirms he has just lit a fat Marley. Anybody else would have to hot-box inside his car to sneak a toke.

“When people think of a marijuana smoker, they conjure up images of some hippie pothead,” Rosenfeld says. “They don’t imagine a guy in a suit and tie with a career.”

As he takes his drags, we wonder what government weed smokes like.