Medical Marijuana Use Sprouting In Israel 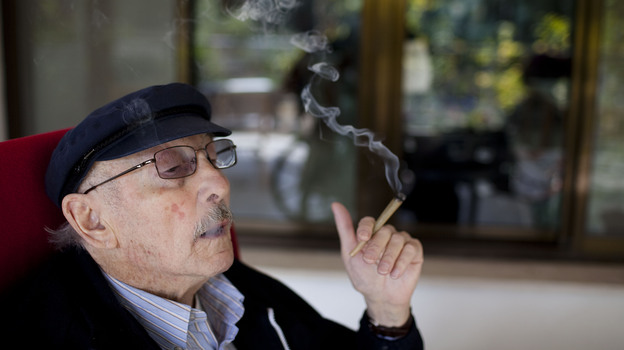 Moshe Rute smokes cannabis at the Hadarim nursing home in Kibutz Naan, Israel. In conjunction with Israel’s Health Ministry, the Tikkun Olam company is distributing cannabis for medicinal purposes to more than 1,800 people in Israel.

Israel has become a world leader in the use of medical marijuana. More than 10,000 patients have received government licenses to consume the drug to treat ailments such as cancer and chronic pain.

But while the unorthodox treatment has gained acceptance in Israel, it still has its critics.

Susan Malkah breathes in the cloud of smoke from a plastic inhaler especially formulated for medical marijuana use. She has a number of serious ailments and is confined to a wheelchair.

“It’s not like we’re kids and we’re getting high and going out and partying. You take it, you’re by yourself usually, you just do it because you want to be in a better place. You don’t want to sit and stew in the pain,” says Malkah, who has been using cannabis for about two years. “It’s natural, it helps, you don’t have to fill your body full of chemicals. It’s terrific.”

More importantly, its use for medical purposes is legal in Israel. Malkah and other registered patients are being prescribed cannabis at the premier medical facility in a country known for its advanced medical care. That’s because many of the head doctors at Jerusalem’s Hadassah Medical Center are touting its use.

Dr. Reuven Or, director of the hospital’s bone marrow transplantation department, says Israel was a pioneer in medical marijuana research and quickly saw and began to apply the benefits. Cannabis not only allows patients to regain their appetite, fight nausea and relax, but it’s also proven to be an anti-inflammatory.