oin the “Silent March” on Father’s Day, June 17 in Manhattan 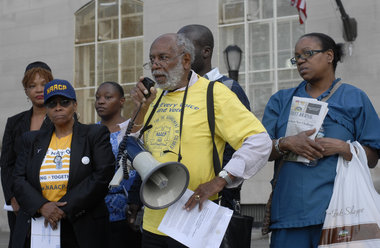 Imagine standing in front of a deli with friends, chatting about the goings-on in the neighborhood, when a police car pulls up and an officer steps out. He asks you why you’re loitering and not at school or work. Your friend mouths off with a sarcastic comment, and all of you get patted down. The officer discovers a marijuana cigarette in your friend’s pocket.

That sort of scenario has been the topic of heated debate in recent months, as the New York City Police Department’s stop-question-and-frisk policy has come under fire for what critics say is its unfair targeting of African American and Hispanic young men.

Nearly a dozen leaders of Staten Island’s African American community gathered yesterday on the steps of Borough Hall — in the shadow of the North Shore’s 120th Precinct stationhouse — to add their voices to a growing chorus decrying stop-and-frisk and to urge Islanders to join a “Silent March” on Father’s Day, June 17 in Manhattan, in protest against what they perceive as regressive policing.

The march will begin on 110th Street and continue to the Upper East Side, ending on 79th St. between Madison and Fifth avenues.