Peace and love still blossom among the ashes of Nimbin 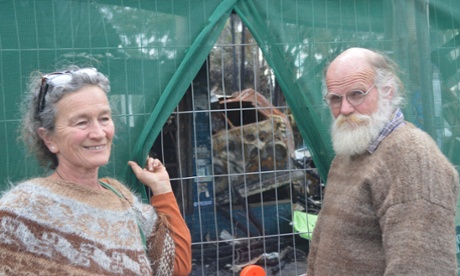 Elspeth Jones and Michael Balderstone, partners in the destroyed Nimbin Museum. ‘Maybe we can get a normal museum now.’ Photograph: Susan Chenery

The facades are faded now, but no less optimistic. The murals of the rainbow serpent dreaming and marijuana bliss, gleefully painted across the shops in the main street of Nimbin in the heady days of the early 1970s, remain.

The faces are weathered, the long hair and beards grey, the idealism tempered by time – but not entirely lost. The dream of living an alternative life in harmony with the earth never died in Nimbin. Dreadlocks and beads wander down the main street in a time warp so perfectly preserved that it feels like an acid trip flashback.

“Soup and hugs”, says a blackboard outside the neighbourhood centre as down the street the heart of the town smoulders in ruins, a mass of twisted metal and charred wood.

The ruins of the Rainbow Cafe and Nimbin Museum, engulfed in flames early on Wednesday morning, are a crime scene screened off as police sift through the ashes.