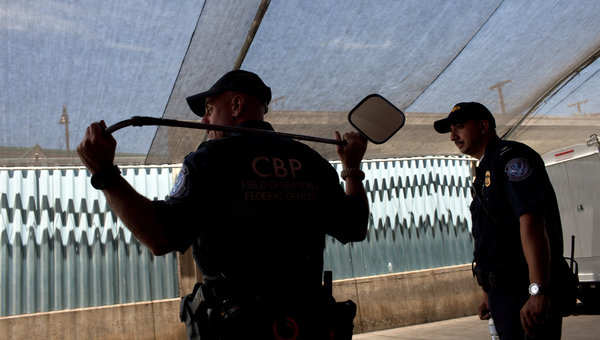 United States Customs and Border Protection agents waiting to inspect cars at Nogales, Ariz., an area where marijuana smuggling has been active.

Looking for signs of smugglers near Nogales, Ariz., alongside the fence that now marks part of the nation’s border with Mexico.

Stationed in Deming, N.M., Mr. Gonzalez was in his green-and-white Border Patrol vehicle just a few feet from the international boundary when he pulled up next to a fellow agent to chat about the frustrations of the job. If marijuana were legalized, Mr. Gonzalez acknowledges saying, the drug-related violence across the border in Mexico would cease. He then brought up an organization called Law Enforcement Against Prohibition that favors ending the war on drugs.

Those remarks, along with others expressing sympathy for illegal immigrants from Mexico, were passed along to the Border Patrol headquarters in Washington. After an investigation, a termination letter arrived that said Mr. Gonzalez held “personal views that were contrary to core characteristics of Border Patrol Agents, which are patriotism, dedication and esprit de corps.”

After his dismissal, Mr. Gonzalez joined a group even more exclusive than the Border Patrol: law enforcement officials who have lost their jobs for questioning the war on drugs and are fighting back in the courts.