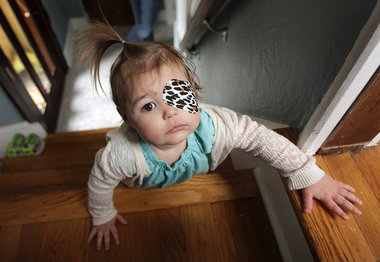 Two-year-old Vivian Wilson sleeps with a heart and oxygen monitor attached to her toe. When she wakes up, the toddler must wear an eye patch and be kept from direct sunlight. An overnight bag, oxygen tanks and other medical equipment are stacked behind the sofa.

Vivian is diagnosed with a rare and severe form of epilepsy known as Dravet syndrome.

These are a few of the ways her parents relentlessly manage everything that comes into contact with their youngest daughter, who suffered her first seizure when she was 2 months old.

None of it is enough. Medications help, as does a high-fat, low-carbohydrate diet — every meal weighed to a 10th of a gram. But only so much.

Vivian’s parents, Brian and Meghan Wilson, enrolled her in New Jersey’s medicinal marijuana program in desperation, hoping that a strain of pot that has stopped most seizures in a small but growing number of children in Colorado and California could help her.

But before her registration card arrived in February, the couple said they figured out the state’s restrictive law and medical community’s unwillingness to participate in the program is preventing any minor from getting help.

Meghan Wilson said she has been writing to and calling lawmakers to explain her daughter’s condition and to ask them to relax some of the medical marijuana program restrictions for the few children who may need it.