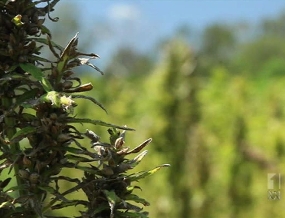 PIP COURTNEY, PRESENTER: Hemp is one of the oldest crops known to humankind.

And some historians believe the need for material to make ropes and sails for the Royal Navy was the real reason behind the establishment of Australia as a penal colony more than two centuries ago.

Now hemp is making a comeback of sorts, with licensed production in most states supplying growing markets in masonry, fibreglass replacements and textiles. But a push to legalise foods made from hemp seeds could be the key to Australia’s hemp industry taking off.

SEAN MURPHY, REPORTER: At Ashford in the New England region of New South Wales they used to grow tobacco on the verdant plains of the Severn River but now farmers like Leon Minos are growing industrial hemp.

LEON MINOS, HEMP GROWER, PONDA: Traditionally my grandparents and parents grew tobacco here, and that was predominantly tobacco. And then the tobacco industry folded and yeah, we’re just looking at another industry to get up and running and hopefully be good for the Ashford area.

SEAN MURPHY: With his wife Connie, they’re growing about six hectares of hemp under licence, providing hurd for a growing market in masonry material for building.

CONNIE MINOS, HELP GROWER, PONDA: We really like the crop. It’s something that’s been a really interesting industry, I guess, for to us get involved in over the last three years. We’ve learnt a lot about it in that time and I guess we’re always impressed with just how diverse the product can be, and it’s something that we’re hoping really does take off.