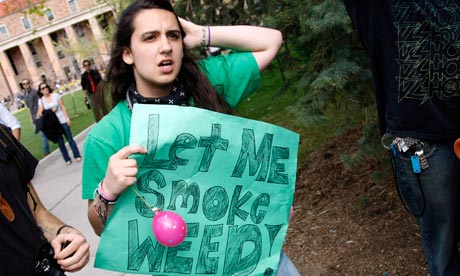 A woman holds a sign at a pro-marijuana rally at the University of Colorado in Boulder. Photograph: Rick Wilking/Reuters

Another glass facade among a string of restaurants, boutiques and offices in downtown Denver, there is little to distinguish the premises save the logo with a green cross. The reception is bright and neat and, at first glance, non-descript. Community event notices on the walls, orchids on a desk, a visitor on a sofa filling in a form.

Copies of National Geographic adorn the coffee table but the eye is drawn to colourful hardbacks: The Big Book of Buds: Marijuana Varieties from the World’s Great Seed Breeders, volumes I to III. Beside them, another catchy title: The Cannabible.

Ean Seeb, the co-owner, offers a warm smile and handshake. “Other places put up Bob Marley posters and palm trees, but if you didn’t know us, this could be a doctor’s office.”

We pass a hallway display case filled with elaborate bongs, waterpipes and glass pipes and enter a sanctum where two employees in black T-shirts serve customers weed from glass jars labelled with names such as Bio-Diesel, Ultimate ’91 ChemDawg and DJ Short’s Flo. They chat about Barack Obama’s victory, check ID, swipe credit cards. It’s all rather routine, even banal.

That is the point. Denver Relief, one of 500 medicinal marijuana dispensaries in Colorado, offers itself as testament to the fact you can openly, legally sell the drug without the sky falling or drugged zombies rampaging.

Which is just as well, because on the same day that Obama won another term, Colorado and Washington voted to legalise marijuana for recreational use, landmark decisions with profound implications for the decades-old, US-led “war on drugs“.