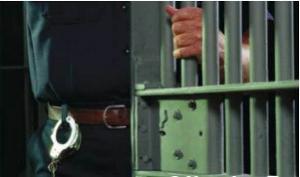 If we can’t keep drugs out of the prisons, how can we keep them out of the country?

In Oklahoma City, an Oklahoma Bureau of Narcotics (OBN) agent was arrested Tuesday by Bureau of Alcohol, Tobacco, Firearms, and Explosives agents in a scheme authorities said was shipping weapons to Mexican drug trafficking organizations. OBN Agent Francisco Javier Reyes Luna, 29, faces two counts of providing false statements in violation of federal guns laws and one count of providing a restricted weapon to a person not licensed to own it for using a straw purchaser to buy five AK-47 semi-automatic rifles from a gun shop and for giving a .50 caliber Barrett semi-automatic rifle to an unknown individual. He may be facing more charges, if the federal complaint is any indication. He’s out on $25,000 bail right now.

In Tulsa, Oklahoma, one man was released from prison and another had charges dropped in a police corruption scandal that continues to fester. So far, 14 people have been freed from prison or had charges dropped in the scandal in which six former and current police officers have been charged in federal court with offenses including drug conspiracy, perjury, witness tampering and civil rights violations. Two men, former Tulsa Police officer John Gray and former US Bureau of Alcohol, Tobacco, Firearms and Explosives Agent Brandon McFadden have already pleaded guilty and are cooperating with prosecutors. Gray admitted to lying on search warrant affidavits in the case of Hugo Gutierrez, who was released from federal prison last Friday. Gray also admitted stealing $10,000 from Gutierrez when he arrested him. Charges against Deon White were dropped July 29. His case is one of 53 associated with undercover Tulsa Police Officer Jeff Henderson, who was indicted July 20 on 58 counts of drug conspiracy, perjury, witness tampering and civil rights violations, federal court records show. The Tulsa World is keeping track of it all here.

In Austin, Texas, a former Austin police officer went on trial Tuesday for having sex with a hooker while on duty and paying her with drugs. Scott Michael Lando faces charges of prostitution, delivery of a controlled substance, misuse of official information, and aggravated assault by a public servant for a series of incidents dating back to May 2006. This trial only deals with four prostitution counts and will feature the hooker, who will testify that Lando gave her drugs and other items in return for sex. Prosecutors already told the court Lando had access to drug dealers and got drugs from them. The state will decide later whether to move forward on the other counts.

In Barboursville, West Virginia, a Western Regional Jail guard was arrested August 3 after getting caught in a sting by authorities. Nathaniel Shawn Johnson, 22, went down after the West Virginia State Police got a tip that he was bringing drugs and tobacco into the jail. They then used an undercover officer, who paid Johnson $300 after he agreed to buy and deliver Oxycontin and tobacco to the jail. He is charged with conspiracy and bringing a weapon onto jail grounds (he had a .22 rifle in his pickup).